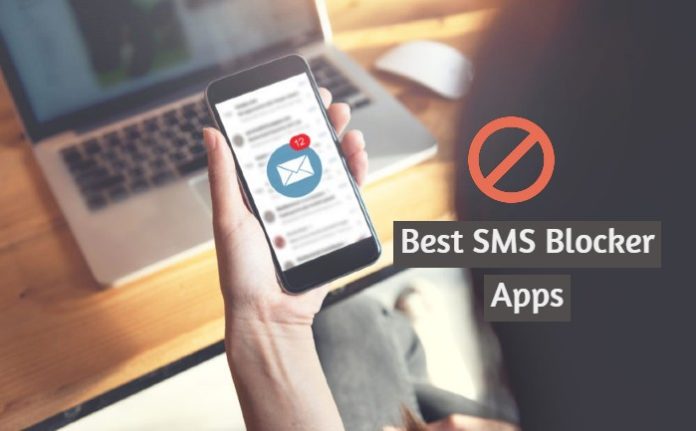 In recent times, marketing has gone up to another level.  Each and Everything is being sold online.  Therefore, in such times, advertising too must keep up to this level. Hence, today many get unsolicited mails or SMS advertising about their various products. While some of the SMS can be very informative and educational, most of it, however, can be classified as spam and irritating. In addition, there are vulgar and pornographic messages too which are being circulated. In such circumstances, some might wonder how to get rid of such uninvited spams or SMS.

If you want to block an SMS, firstly go to the Messages screen. Open the conversation or SMS. In the upper right corner, there are three dots. Click on it. Immediately the ‘People and Options’ box will be shown. Select the option ‘Block Number’. To confirm this action, a pop-up window will come up to confirm whether you want to block this number. Besides, you will be informed that if you block this number, then you will no longer receive calls or text messages from this person.

There are various other methods to block SMS on Android devices. The first method is to use Android’s Messaging App to Block texts.  Secondly, there are some pure Android-based phones such as the Nexus line. Here the app to block SMS works differently and the settings too may vary. The Third method is to use a Dedicated Third-party App. There are many SMS blocking apps that can be downloaded from Google Play Store. Mentioned below are some of the best 8 apps available today.

Now, let us check out some of the best SMS blocking app for android. 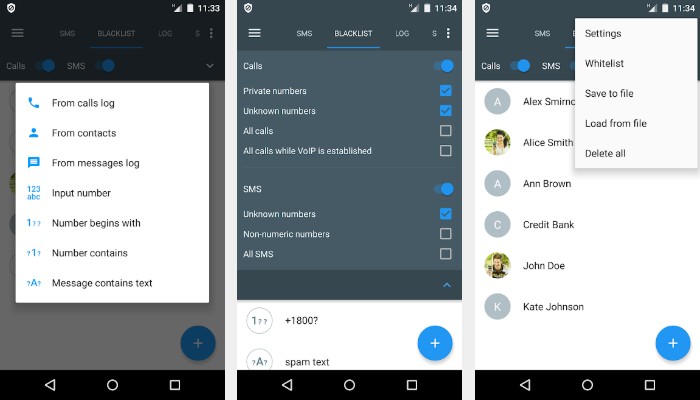 This app as the name itself suggests allows the user to block unwanted calls and messages. The blocking list of numbers can be selected from either your list of contacts, phone memory, or even entered manually. The best part of this app is that it will not allow you to be disturbed by even a single ring. Yes, this app blocks unwanted SMS even before the first ringtone can be heard.  This app is beautifully designed.  Some of its salient features are:

There are other great features as well which can be activated using a single button. Most importantly this app does not take up too much of the device memory or other resources.  The app is ready to work immediately after its download. Because of all its great features, this app is one of the best SMS blocking apps for android available today. 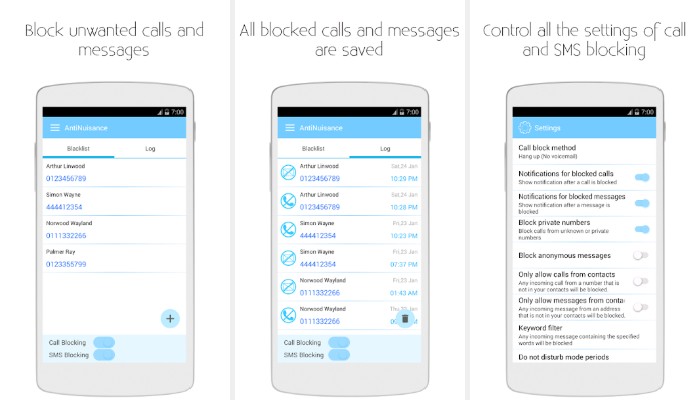 As the name itself suggests, this app is specifically for those who want to seriously look for an SMS blocking app for android. This app has been specifically developed to stop calls and SMS from unwanted numbers, spammers, and other advertising agencies. The procedure is very simple. A blacklist can be created wherein all calls and messages from a specific number will be blocked. At the end of the day, all calls and SMS received will be logged and a report is ready for your perusal. Besides, a time limit can also be set for barring unwanted calls. To name a few of its features:

This app makes it into the list of the top apps for blocking SMS because it works perfectly.   The app is very simple to use and can be considered a lightweight software app. 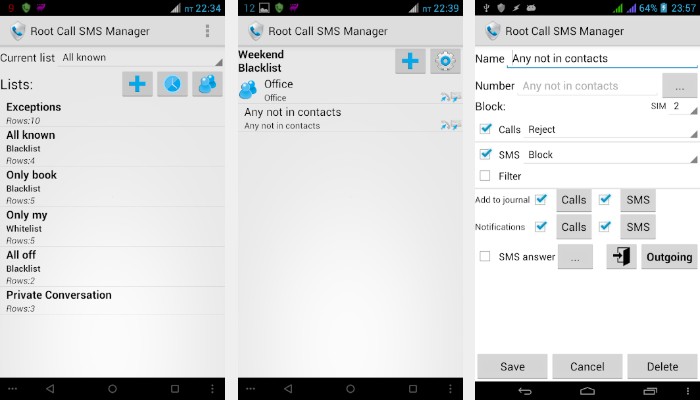 This SMS blocking app is good for those Android users who have two sim cards. The attractive feature of this app is that it allows the user to have two blacklists, one for each sim.   Some of its prominent features are:

As per the rating given by its customers, this app has received 4.5 stars out of 5.  So, this app is a great SMS blocking app. 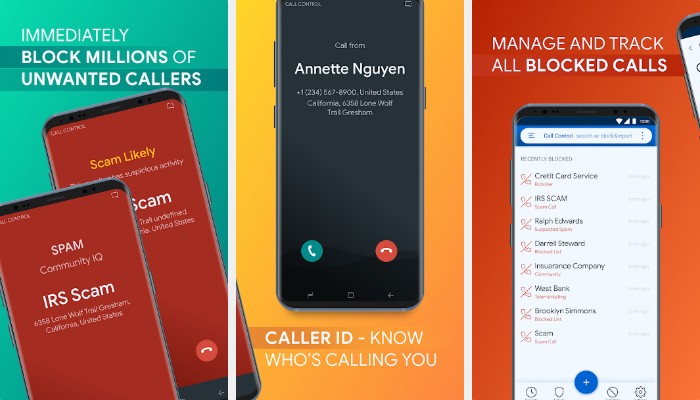 This is a very easy to use SMS blocking app. This app blocks unwanted phone calls as well as text messages as per your blacklist. Same time it also has a community blacklist that blocks calls from spammers and telemarketers. It is loaded with many extra features.  Some of them are:

This app for blocking SMS is so popular that today there are more than 5 million users of it. 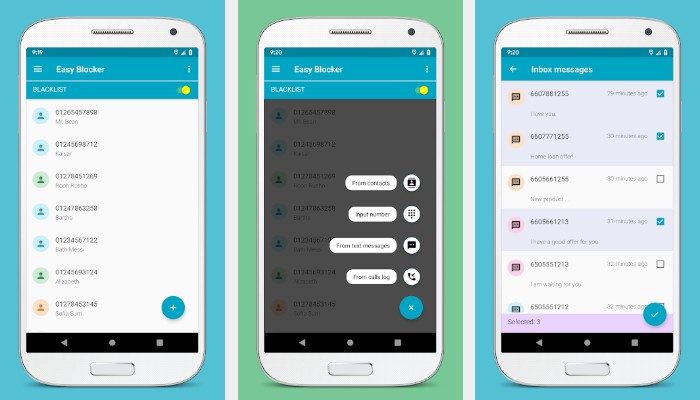 This SMS blocking app for android is popular as can be gauged from the fact that till now it has been downloaded more than 1000000 times. 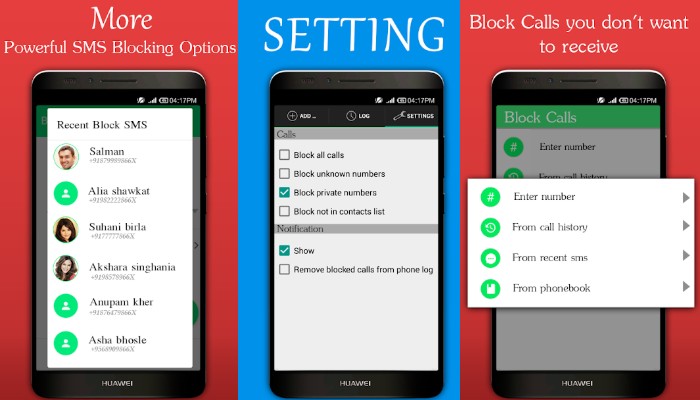 If you are looking for a specific SMS blocking app for android, then this app works well on Android devices.  It is found to be very reliable. Unknown calls or SMS, unwanted notifications, etc can be barred without any hassle. To list a few of its features:

Surprisingly though, despite the app working reliably, its customers have not given it a very good rating. It has received 3.7 stars out of 5. 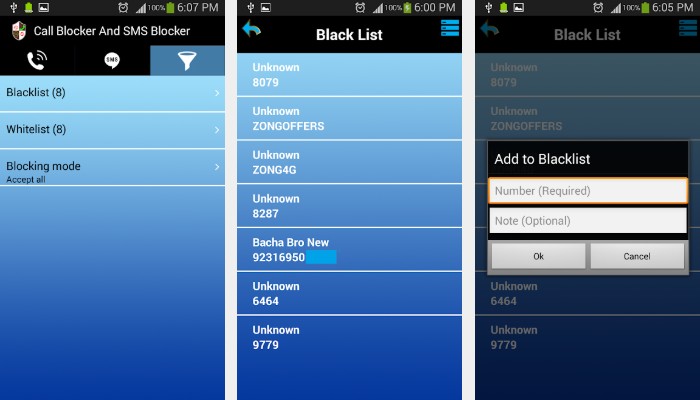 If you are looking for a basic and simple call or SMS blocker, then this app is for you.  It can maintain a record of rejected numbers and has a Blacklist wherein spam or unwanted numbers can be added. It automatically rejects unwanted calls and SMS.  It is a very powerful SMS blocker and can be used for blocking calls as well as text messages. 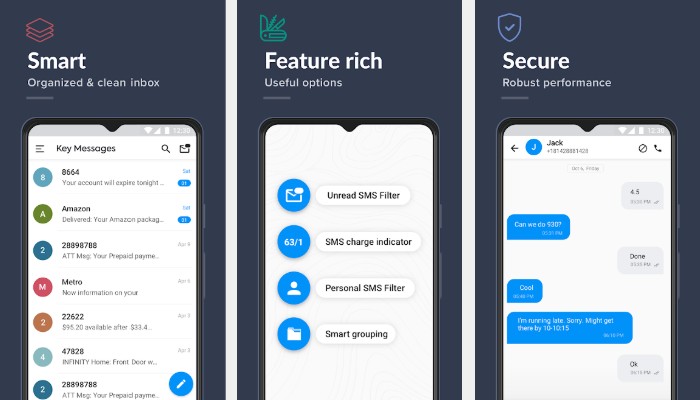 This SMS blocking app for Android users is very popular. It offers the users an easy configuration for blocking unwanted text messages. It is very important to block spam and another deceptive message content immediately so that it does not end up filling your Inbox.  In such cases, this app offers quick prioritization, regular database updates, and so on. This SMS blocking app has been found very effective by its users that it was rated 4.1 stars out of 5 and therefore has been downloaded many times.

There is one important point to be kept in mind.  Whenever a number is blocked, their calls, as well as SMS, will also be blocked.   The person who sent the message will not receive any notification.  It will be that the text has been sent but not delivered.  Therefore, please recheck carefully and revaluate the numbers that have been blocked from time to time.

All of us lead busy and stressful lives. So, in such cases, a mailbox full of unwanted Text Messages can make our life even more stressful. Not only that, today some very dangerous and pornographic messages are being widely circulated. Because of the lockdown situation, many parents have given their children phones to either play or to attend online classes. In such precarious situations, SMS/Text blocking apps for Android phones are a saviour. The parents can add some risky or keywords and thereby block the harmful messages.

Thankfully, there are so many apps for blocking SMS. Based on your Android device, one of the apps may perform well when compared with the others. This may be due to your device brand or even it depends upon the Android version being used. So, go ahead and choose the one which is suitable for your device. So, then you will no longer waste your time clearing away all the junk SMS by effectively using the SMS blocking App.

How to Get Free Money on Cash App?