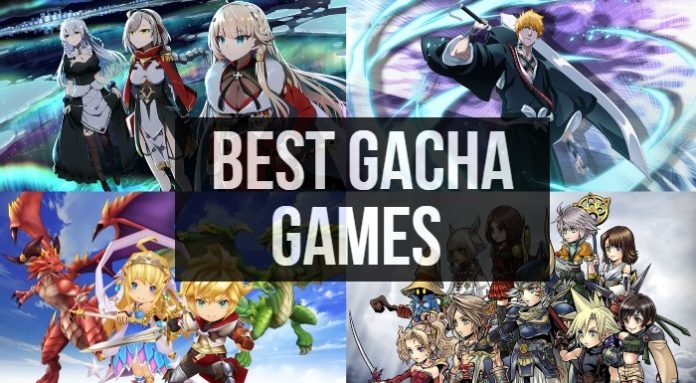 Gache games are among the most played games in Japan in these last decade. The game is widely popular because of the loot and treasure hunts in virtual places. The trend of playing this game has crossed the line in many countries because of its gameplay. Folk love to play it on their mobile and PC to get an authentic experience of wars and battles in their phone. The gaming trend has bound the developer for creating some best gacha games which can be enjoyed even in the mobile phone. The high RPG gacha games fit best with the high version of Android and run without lags. In this post, we will reveal the top 10 gacha games of 2020 who have grabbed a lot of attention among the people on a global scale.

It is among the top gacha games of years. Users can enjoy the game on both android and iOS devices. It is full of gacha mechanics that provides 2D shooters genres, tactical and RPG games. Azur Lane is precise to control and can be mastered with some practice. New gacha game lovers must try it to start their journey in the Gacha gaming field. Users can build their warships and travel across different places to face new conflicts. They can collect more rewards by compiling more gold coins in the game.

Another Eden is a high RPG gacha games which are new to the gaming era. It has a beautiful storyline. Pull the Gacha to get a good experience of facing situations in the game. Users can embark on the journey of space and time and travel to the future to protect the world. The RPG theme adds it to the list of best mobile gacha games. Impressive visual effects and high optimized graphics keep the players engage for a long time. There is no comparison of the soundtracks as it perfectly suits the gaming characters. Every new update of the app brings some new type of Gacha features to surprise and excite its users. It can be the game of choice for those users who want to enjoy some captivating gameplay for Android.

Tales of Erin is a new challenging game with large file size. Players can experience very advanced graphics with high RPG features. It is full of tactics, drama, and fantasy that make the storyline more interesting. The player has to travel to fantastic new locations and face cold war with gods and humans. The sound matches according to the scenes to keep the player engaged during the gameplay. The storyline is based on the tales of Erin with more than 80 characters to explore. The advances Gacha system will give a new challenge to master the skill and explore the power of Divinity. The intense visual effects and graphics take the Gacha gaming experience to the next level.

The mega-hit gaming series Bleach universe inspires this game. All the characters of these series are available in the game to enjoy the same environment of the Bleach universe. New characters of the series are loaded in the game to provide the same feel of enjoying the game. All these characters are experts with their abilities to attack the opponent team. The player needs to choose the favourite anime character and change the outfit as per the requirements. It makes nature look unique in the gacha battle. The game gives rewards like weapons, outfits, armour to the character for spinning Gacha in the gameplay.

It is among the top gacha games which provide the most addictive gameplay. The player has to build a character using the game currency to continue the journey of the internal realm. It will make you feel like being in a Disney land as more effort is given to enhance the environmental graphics. Destiny Child offers most of the costumes and weapons to remain alive in the place. The survivor has to stay between tons of evil characters to enjoy the journey in the beautiful land. It has also added unique voices of each new name to make it an enjoyable game. It can be the game of choice for those who want to build characters using the Gacha tools.

Dragalia Lost is a  high charm gang game listed among the best mobile gacha games. It has high RPG features that comprise the war between humans and dragons. The battle makes the game more interesting for the user. It has a beautiful storyline behind the action of the dragons. Users have to conquer the dragons by applying unique fighting skills. They can use armours, long swords, and other traditional weapons to kill them. The game, in return, provides amazing rewards for rotating the Gacha. People searching for high graphics games must try it out to get an extensive experience of high RPG gacha games.

Honkai Impact 3rd comes among the top gacha games with advanced mechanics. The weapons, outfits, and scenes are quite advanced to make anyone its a fan. Characters like Valkyries are present in the game with unique attacking abilities. The Player has to option to switch to any of the characters and use weapons to win the battles. Powerful weapons come with some names like Stigmata and Rigitwris full of the gacha system. Players get extraordinary attacking powers like thunder attacks, shader darkness peals, etc.

Bleach Brave souls are among the best 3D RPG gacha games comprising of magma hit and animal bleach. Users can control the characters with easy to use control buttons. Players can make a team of three characters and land themselves in the battle to face new challenges in the game. The story of the game starts after the first meet of Rukia and Ichigo. It also has a feature to develop the characters to simulate pivotal scenes. Players can level up their powers and get the special attacking features to challenge the opponents.

The name of the game itself describes the Gacha system. It is an epic game to enjoy top Gacha Quest and PVP matches between friends. Players get the option to create their own sized Gacha Summoner and earn gems for farming and fighting battles. More than 90 characters are available, which makes it a high elemental Gacha battle game. The player needs to have the latest version of the Android phone to run the game. It may lag on old android devices.

The Final Fantasy series inspires this game. The mini-opera scenes of the game distinguish from playing other Gacha games. It’s also a very high RPG for the match with Gacha mechanics. The game is quite suitable for a newbie to understand the gacha game. Players can collect a wide range of characters from the screen and choose any of them to begin the gameplay. The reward system gets unlocked after pulling the Gacha, which helps to use new weapons to challenge the opponent.

Gacha games have brought a new experience for gamers who are fond of collecting loots. The above list of the best mobile gacha games might have helped to get an idea about their features. Players who want a lot of rewards to doing more stuff in the game must try some top gacha games to fulfil their intention.

Smartphones Vs Tablets: Which Device is Best for Gaming?

The Advantages Of Managed IT Services For Your Business