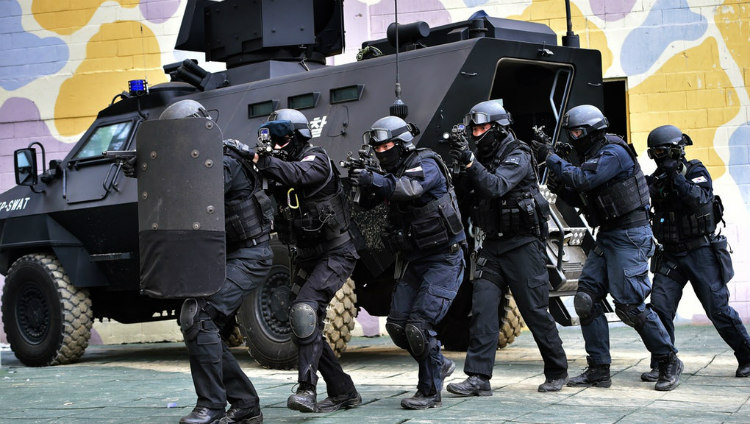 Picture this. You’re sitting at home, not expecting anyone to show up at the door. And then suddenly there’s a fully-kitted SWAT team busting through. They order everyone in the house to get on the ground at gunpoint, and everything is in utter chaos. Imagine the confusion and terror that the situation can cause its victims. Swatters think this is one big prank. They don’t care that they’ve now caused someone trauma for life.

This is what swatting is. It’s a form of harassment where someone calls an emergency line like 911 and provides a fake (but violent) emergency along with the victim’s address.

Usually, swatters are people in the online gaming community. They feel slighted or angry because they lost a game. Swatters consider what they do to be a prank or revenge for what happened in the game. They don’t fear any retribution for their actions.

Here’s a full breakdown of how swatting works, why it’s so dangerous, and how people can protect themselves from getting swatted by an internet troll.

How Does Swatting Happen?

Gamers tend to be the most prominent victims and perpetrators of swatting. Although past cases of swatting aren’t limited to players. It has happened to celebrities like Rihanna as well.

Swatters gather information about their victims through various methods. Those include doxing and social engineering. In some cases, they can even trace their victim’s address through their IP addresses, especially in games that use peer to peer sharing. And many smaller titles do so to save on resources.

After the swatter has gained enough information to identify their victim, they make an anonymous call to emergency services.

Who Are The Victims of Swatting?

One of the most prominent cases happened in 2017 when SWAT officers accidentally killed Andrew Finch in his Kansas home. That event is also what sparked more widespread awareness of this horrendous “prank.” It calls everyone to action to prevent future occurrences.

But while most swatting victims have been those within the gaming community, they aren’t the only ones. Anyone can be a victim. Not even celebrities like Justin Bieber or Ashton Kutcher are safe from this.

Anyone who angers an internet troll or has a disagreement with a stranger on social media is in danger of being swatted. It’s not possible to be sure that the person on the other end isn’t a malicious individual with the means to pull a swatting “prank.”

Swatters Face Penalties But Are Hard to Find

The US legislature has tried to get penalties in place to dissuade people from trying to swat others. There are a few other countries that have followed suit as well. The problem is, finding the people who do this isn’t all that easy for law enforcement.

Usually, tech-savvy people carry out this type of harassment. And they know how to hide their tracks. They make it look like the call is coming from inside or nearby the victim’s house. Swatters use sophisticated tools like ID spoofing to conceal their identities. It keeps law enforcement from finding them.

Of course, it doesn’t always work out for the perpetrator. In the case of SWAT members shooting and killing Andrew Finch, the man who sent the emergency call was found. The swatter had called emergency services on a house that he had thought belonged to a fellow player in a CS:GO game.

The police were able to track him down because he had bragged on Twitter about the incident. After an ongoing trial, he was sentenced to 20 years in prison. He might not have pulled the gun himself, but he is responsible for Andrew’s death. Not to mention the fact swatting wastes resources and time that could have been spent dealing with an actual emergency.

The tips included here are useful not only for gamers. Anyone who uses the internet for anything can and should follow these steps too.

As terrible as the idea of swatting is, there are a few things that people can do to prevent hackers from finding their home address. Don’t get complacent on the internet and think that it won’t happen to you. Attacks are getting more sophisticated. And criminals (along with irresponsible teens) keep getting bolder thanks to anonymity tools.

How to Install VUDU on FireStick/Fire TV